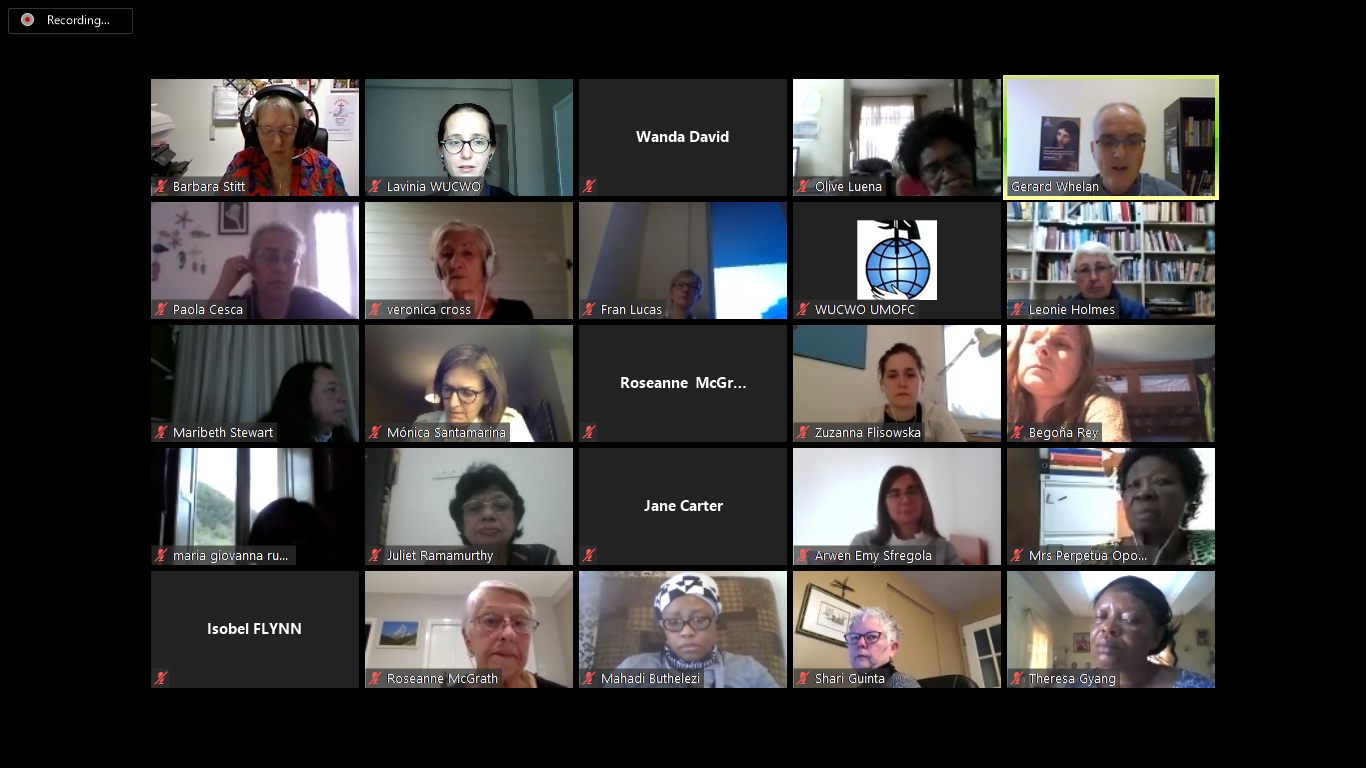 The World Union of Catholic Women, as a gesture of solidarity at this anxious time, decided to hold three webinars on the subject of Solidarity and Synodality, one in English, one in Spanish and one in French. They invited every group of Catholic Women, who are affiliated with them, to join the webinar, so on 28th April I had the privilege of joining 34 other ladies from around the world through the marvels of the internet.

The International Chaplain of the World Union of Catholic Women, Fr Gerald Whelan, who led the session from Rome, sent us two papers to read beforehand. One was an address given by Pope Francis to an empty St. Peter’s Square on Friday 27th March, which was based on Mark 4:35-40, when the apostles were on a boat in the middle of a storm and Jesus was asleep. They said to him “Teacher, do you not care that we are perishing?” Jesus stilled the storm and said to them “Why are you afraid? Have you still no faith?”

The apostles thought that Jesus did not care for them. It is the worst of feelings when we think that people don’t care for us. But Jesus did and still does care. In this storm of the corona virus and in every storm of life, Jesus is our anchor, because, by his cross, we have been saved. Jesus is our rudder, because, through his cross, we have hope and, by his cross, we have been redeemed and healed, so that nothing and no one can separate us from his redeeming love. Embracing his cross means embracing all the hardships of the present time, abandoning our eagerness for power and possessions in order to make room for the creativity that only the Spirit is capable of inspiring. Embracing the Lord in order to embrace hope: that is the strength of faith, which frees us from fear. The Holy Father, at this time of uncertainty, is calling us to row together through this storm and to realise that we will make no headway if we only think of ourselves but it is only together and with Jesus’ help that we will overcome this present crisis.

Fr Gerry spoke of similar occasions, throughout the whole of history, when the people of God were called upon to work together in solidarity, as an indication that this is a challenge that has been faced by society since God created man and woman and it is only by working together that we will succeed.

We then broke for a cuppa and had an opportunity to chat with two or three other attendees. I was very impressed with the ladies from Africa, who were so full of enthusiasm.

In the second half, Fr Gerry spoke about Synodality. For the first 10,000 years the church was ruled by the bishops, who got together with all the other bishops in their area to make all the decisions. This was called Collegiality. It was only on very rare occasions, when they couldn’t agree on some very important matter that they consulted with the Pope. However, some kings became very powerful and were able to influence the bishops to bend the rules, so the Popes had to step in and take control, which worked well for some time but eventually the Popes also became too powerful and began to surround themselves with far too much bureaucracy.

Vatican II introduced the idea of getting back to Collegiality and even including the Laity as consultants but, although the concept of Parish Councils was activated, the curia saw to it that Collegiality did not develop. Pope Francis has taken up the challenge of activating Collegiality and including the laity, which changes the name of the process into Synodality. This is why we are having so many Synods in our church at the moment. Pope Francis is insisting that synods are occasions when bishops and the laity are free to express themselves honestly and openly and are listened to with respect. Let us pray that our Australian Synod will be able to proceed eventually and that the Bishops and the laity will be inspired by the Holy Spirit to renew the Church, which has suffered so much, due to the sexual abuse of children.

Let us also give thanks that Pope Francis has had the courage to take on this burden and that the Holy Spirit will give him the strength and health to see it through to completion.