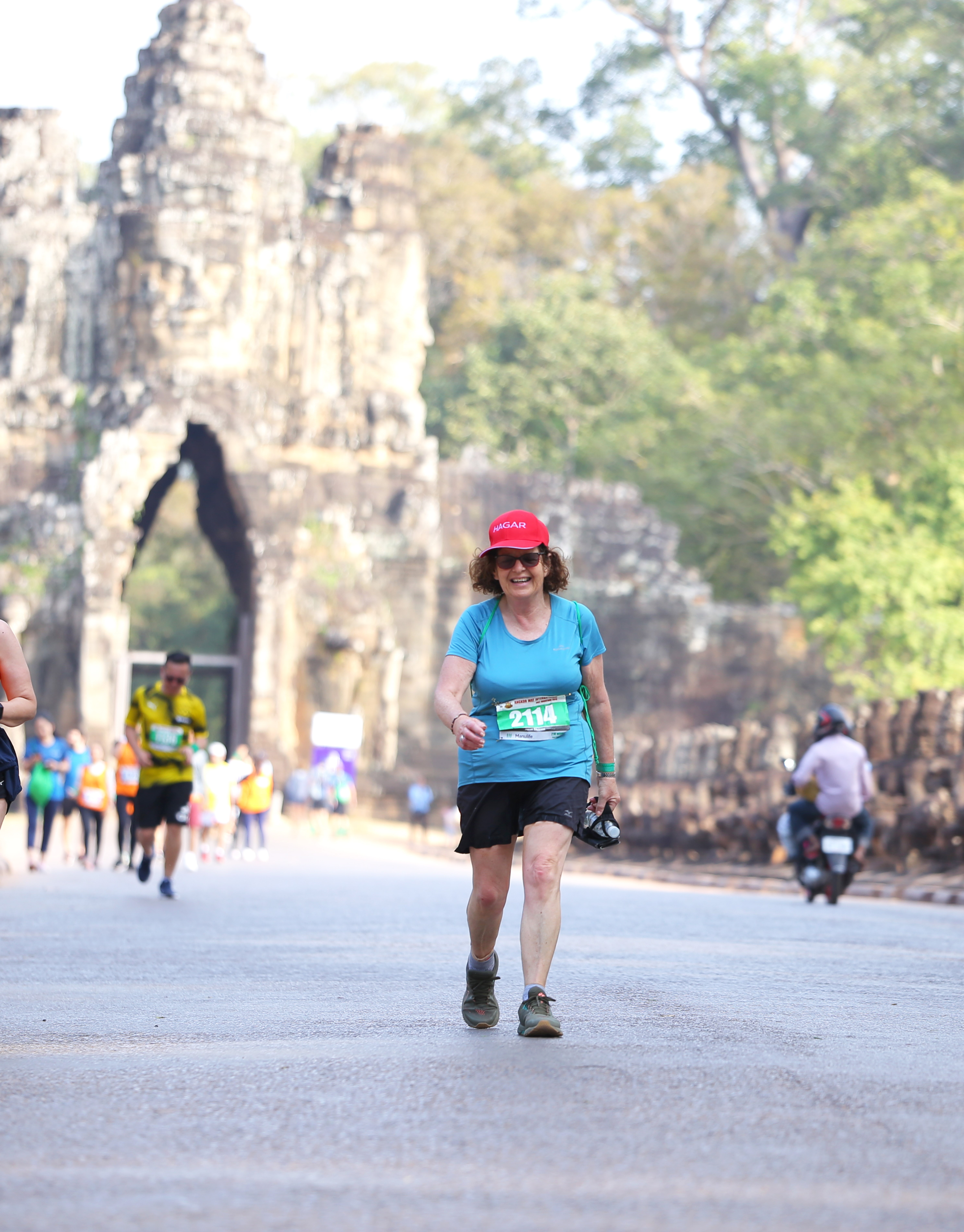 On a dark Cambodian morning in December 2019, I lined up with around 10,000 runners and walkers nervously awaiting the starter’s gun for the Angkor Wat Charity Half Marathon. There was a buzz of excitement and anticipation. The morning was very dark and cool. The early start time designed to miss the expected heat later in the day and the crush of runners made for precarious footing for the first few hundred metres. The course would take us around the main tourist temple circuit at the Angkor Wat temple complex near Seim Reap in Cambodia.

We were off. In the darkness I lost both my husband and new friend from Australia who I had agreed to run with. Both having promised to make sure the other reached the finish line.

This sponsored run in Cambodia presented a novel opportunity too good to miss. Catholic Women’s League of Aotearoa New Zealand has in recent years worked to support WUCWO’s, (World Union of Catholic Women’s Organisations) call to fight against human trafficking and exploitation.

Many New Zealanders are shocked to learn of worker exploitation and modern-day slavery within New Zealand. I had become angered and moved to action after discovering that an employee at our local bakery, an immigrant from Sci Lanka, had been trapped in slavery type working conditions. He had been underpaid and exploited for months right under our affluent noses. His employer was prosecuted and forced to pay a very large sum of money in backpay. February 2020 saw the first ever prosecution within New Zealand for slavery. This case also involved exploiting immigrant workers.

The trip to the Angkor Wat Charity Run, organised by the New Zealand Fundraising Co-ordinator for HAGAR New Zealand, was an ideal opportunity to support a frontline organisation, spread the word about human trafficking while fulfilling our passion for running around the world.

I had spent several months raising awareness of human trafficking and exploitation both in NZ and overseas while fundraising for HAGAR
Hagar is a Melbourne, (Australia) based organisation that works primarily with victims of human trafficking and exploitation in Cambodia, but also in Vietnam and Afghanistan. Hagar New Zealand is primarily a fundraising arm. This run was the culmination of our fundraising efforts. The HAGAR group, styled RUN for Freedom, included twenty other runners and walkers from NZ and a similar number from Australia.

I had given presentations at CWLANZ diocesan conferences around New Zealand encouraging members to sponsor my run. I raised awareness further by having articles published in local print and online media and holding a fundraising stall. The stall was a team effort. Members of my Catholic Women’s League branch contributed plants, knitting, and sewing.

As I made my way around the course, I had plenty of time to ponder the privileged life I lead and the tragedy and challenges of the victims of human trafficking. The run experience gave me a special warm feeling of satisfaction knowing we had done something good for trafficked women and children.

While in Cambodia, my husband and I were privileged to spend time with some HAGAR Staff in both Phnom Penh and Seim Reap. These wonderful, dedicated women shared their stories and gave insights into the work they do as emergency foster parents to children who are uplifted from dangerous situations. In Seim Reap we meet adult survivors and were humbled by their stories of courage and resilience.

Pope Francis April 2019 said, Human trafficking is a "crime against humanity.” He went on to say, "in its multiple forms, is a wound in the humanity of those who endure it and those who commit it.”