“Pray for Cuba, that is bleeding"

“Pray for Cuba, that is bleeding" 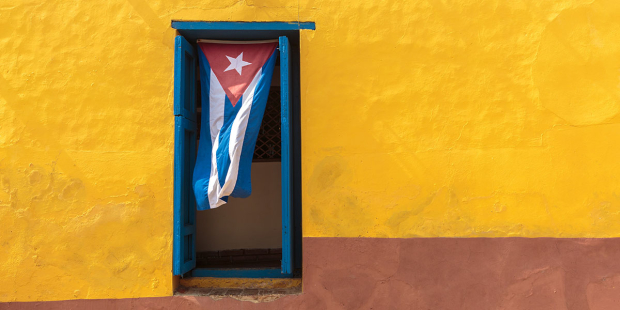 Her heartbreaking testimony invites you to look back at that long-suffering island, whose ordeal seems not to end.

The testimonies of the Cuban doctors in Venezuela, a few hours ago through a Colombian media, have highlighted the harassment suffered by the Maduro regime, which forced them to condemn those in need of health care to support the president and proclaim its "goodnesses". They have done this, outside, of course. While they were in Venezuelan territory, under the magnifying glass of both Cuban and Venezuelan governments, they had to keep their mouths shut.

It is no secret, the presence of Cuban doctors - and others under that payroll, not so doctors - in several Latin American countries. They arrived to Central America, Brazil, Colombia and, above all, Venezuela under a cooperation agreement between the governments of Chavez and Castro. The idea was to change services for oil but after the real purpose of the matter was understood: displace Venezuelan doctors, in absentia due to the lack of inputs and bad salaries and taking advantage of the work of Cubans in exchange for beggars they received from the Cuban State, the real beneficiary of the wages they received in Venezuela.

The result has been the exodus of Venezuelan medical professionals to other countries and the escape of Cubans abroad, with the help of the Venezuelans themselves who have always commiserated the situation that experts qualified at the level of international human rights organizations as "the new slavery."

The island acts as a “tutorial” for what happens in Venezuela, especially if it is to impose domination by submitting to the state's gift. In Venezuela we replicate a terrible health situation, traced by the Cuban model. It is true that the mass migration generated by Maduro’s regime has impacted the continent, but a look is imposed on the endless tragedy that the Cuban people are experiencing.

EDELMA: I SEE 40-YEAR-OLDS WITH BEDSORES

Edelma is a Cuban who works side by side with the Catholic Church to relieve, to the extent of her precarious possibilities, the pain of her peers. She lives the Gospel and proclaims it with testimonies of generosity. She is active in the World Union of Catholic Women’s Organisations (WUCWO) and her friends have multiplied throughout our continent.

We have received a testimony written by her own hand, which we reproduce below and to which we have not altered a comma. As she wrote it, so it goes. With the limitations of a country without the most elementary possibilities. With tears in our eyes we have gone through her lines, perhaps feeling that we can see ourselves in that mirror today in Venezuela. Any Venezuelan family, any hospital, any home could attest to what she tells.

Through this testimony the deep and daily anguish of the people devoid of even the most elementary is perceived. Describing a case that has touched her so closely, Edelma reflects the Cuban pilgrim's diary in search of medicine on time, by praying, seeing Christ in the other and fighting sadness with joy and hope that don’t abandon the believer.

Hereby, the lines that she directs to a Venezuelan friend, Virginia Rivero, also of WUCWO, full of pain but also of a courage that only faith sustains:

“Dear friends, sisters, after 15 days I sit down to write. On September 8 we had to run to the hospital with Lalo. He caught a bacterial bronchopneumonia that invades our country, with all kinds of viruses, it's horrible, thanks to true Friends as you he was accepted in intensive care in very serious conditions...

All praying outside, they were three very strong days, but I trusted the Lord, besides Lalo does not drink, does not smoke, on the contrary, but he was dehydrated, his pressure and sugars high. He was then moved to intermediate care, there they allowed me to be with him and I think also the Lord put us there to judge the pain of so many. I experienced young people of 40 years with bedsores, I thought so much of Jesus, without medication, I grabbed the phone of the room and called all the religious women I know and finally I was able to get two creams for the young man. That is where holiness is, in a smile, in sharing the food that my family brought me with OTHERS WHO HAD NOTHING, SO SAD, BUT I THOUGHT I HAVE TO LAUGH HERE MORE THAN I WAS IN THE CULTURAL NIGHT OF WUCWO. HOW MUCH I THOUGHT OF YOU, MY BELOVED GROUP OF HOLINESS. WE WERE THEN MOVED (I tell you everything because it is my testimony) I know that Virginia will understand me more than all of you…

The cockroaches walked around, what a horror, but how much I remembered Maribeth and the assistant Father and the environment. The trash not dumped, I mobilized the women, we have to clean, I put two nylon bags in my hands and started taking out the trash. Dante became little in the Divine Comedy, how many sick people, to whom I had to smile, help them, the nurses were very young but very capable, the doctors very professional, but these were the real conditions, what pain, the pain of doing so little. I didn’t let anyone stay with Lalo, because the nurses when seeing him so ill and the catheter dropping out they told me tomorrow when the supervisor arrives he will take his vein. They had already given 6 shots and I told him even if you need to try 8 punctures it doesn’t matter or I’ll do it, you are a nurse, you know that 8 hours for him could be his life, you have to be brave. Lalo was riddled, but we managed to put the catheter. Many students who are studying study medicine draw near to support me, there is still heart in the people of Cuba. When Lalo got better he started praying with me and the doctors asked us of what religion are you?

We told them Catholics. Thank God we are back at home, he is resting. Now my daughter-in-law and my granddaughter have Dengue but it is not hemorrhagic, they are at home. If you add to this the problem of transportation: three buses a day, the country paralyzed, there is little I can explain to you. Only an unbreakable force can sustain us, JESUS OF NAZARET. I would like to share this with the other three components of my Holiness group, but my English secretary who helped me so much with the Action Plan for the group can't help me now and my knowledge of English is not enough, but I know that some of you can...

THANK YOU AND PRAY FOR CUBA THAT IS BLEEDING OUT, UNDER A FAÇADE THAT IS NOT THE REAL ONE...