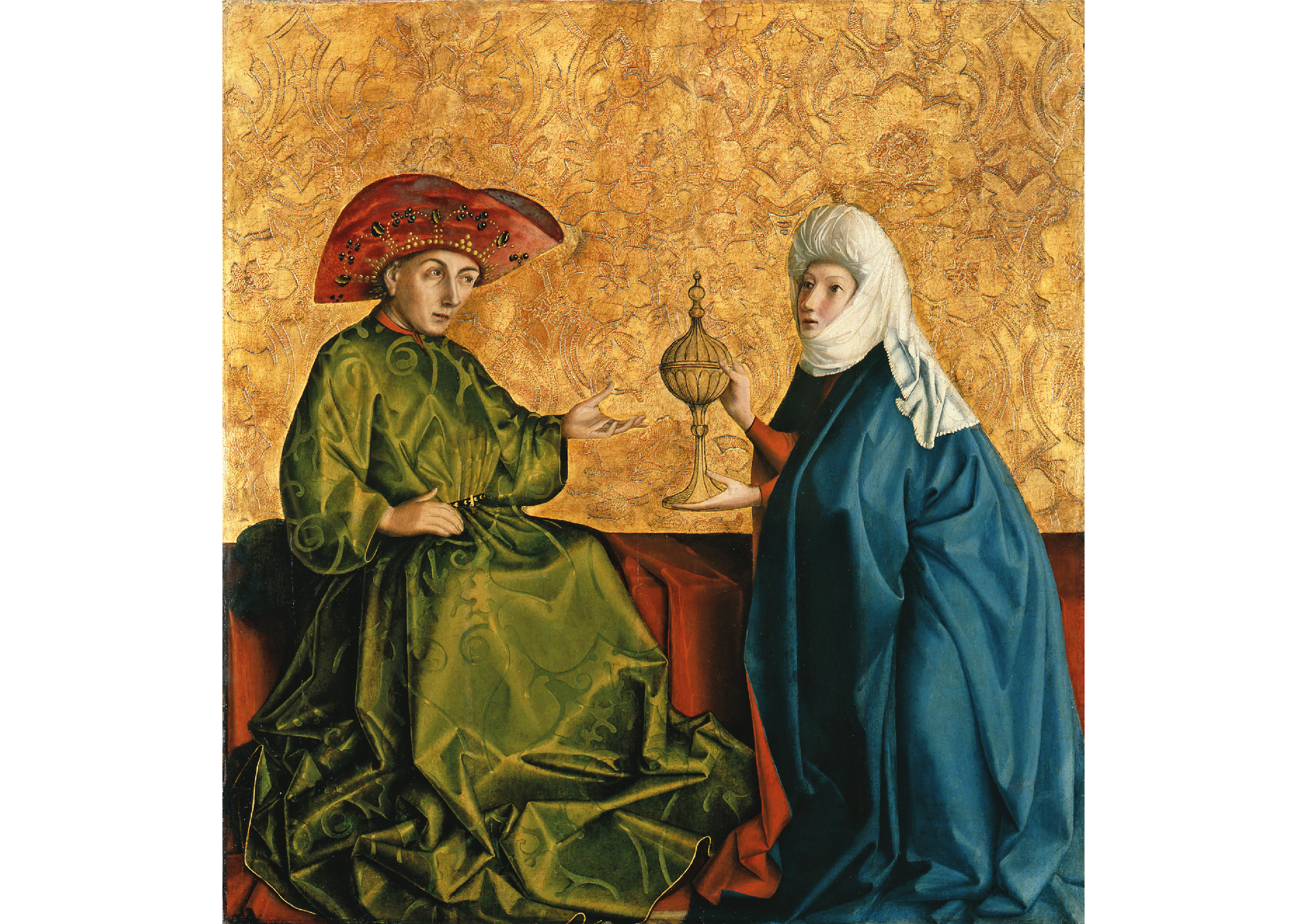 Women of the Old Testament: The Queen of Sheba.

The Queen of Sheba, hearing of Solomon's fame, came to test him with subtle questions. She arrived in Jerusalem with a very numerous retinue, and with camels bearing spices, a large amount of gold, and precious stones. She came to Solomon and questioned him on every subject in which she was interested. King Solomon explained everything she asked about, and there remained nothing hidden from him that he could not explain to her.

When the Queen of Sheba, witnessed Solomon's great wisdom, the palace he had built, the food at his table, the seating of his ministers, the attendance and garb of his waiters, his banquet service, and the holocausts he offered in the temple of the Lord, she was breathless. "The report I heard in my country about your deeds and your wisdom is true," she told the king. "Though I did not believe the report until I came and saw with my own eyes, I have discovered that they were not telling me the half. Your wisdom and prosperity surpass the report I heard. Happy are your men, happy these servants of yours, who stand before you always and listen to your wisdom. Blessed be the Lord, thy God, whom it has pleased to place you on the throne of Israel. In his enduring love for Israel, the LORD has made you king to carry out judgment and justice." Then she gave the king one hundred and twenty gold talents, a very large quantity of spices, and precious stones. Never again did anyone bring such an abundance of spices as the Queen of Sheba gave to King Solomon. Hiram's fleet, which used to bring gold from Ophir, also brought from there a large quantity of cabinet wood and precious stones. With the wood the king made supports for the temple of the Lord and for the palace of the king, and harps and lyres for the chanters. No more such wood was brought or seen to the present day.

King Solomon gave the Queen of Sheba everything she desired and asked for, besides such presents as were given her from Solomon's royal bounty. Then she returned with her servants to her own country. (1 Kings 10:1-13)

I wanted to quote in full the short passage recounting the visit that the Queen of Sheba makes to Solomon. It is a meeting with only two protagonists, a king and a queen, who know each other first by reputation and then in person. But it is only the woman who speaks, and she uses words of great praise for the sovereign, the news of whose wisdom had made the rounds of the courts of the then known world.

If, after reading the biblical account, we take a closer look at Witz's painting, we find the same elements, starting with the presence of the two sovereigns alone. Perhaps we would have expected a painting showing Solomon's court or the procession of notables who certainly accompanied the Queen of Sheba to Jerusalem. But no, there are only the two characters who occupy the entire painting. The background - gold in the upper part and purple in the lower part - further embellishes the elegance with which the rulers are presented: the elaborate headdresses, the defined colours of the robes, the folds of the robes that almost seem to construct the two figures.

The dialogue between Solomon and the Queen of Sheba takes place through looks and gestures. In particular, the hands nourish and describe what the biblical story tells us: the woman hands over a single gift, a precious golden pyx that seems to sum up the description of the gifts left to Solomon: "she gave the king one hundred and twenty gold talents, a very large quantity of spices, and precious stones". The delivery of a gift thus becomes the action that connects the two characters.

This singular visit of the Queen of Sheba to Solomon has subsequently found various interpretations. It was seen as a prefiguration of the visit that the Magi, who had also come from the East, made to Bethlehem - a few kilometres from where Solomon's temple and palace stood - to worship the newborn Christ, who was then understood to be the New Solomon. Another interpretation saw in the Queen of Sheba the prefiguration of the Church coming to Christ to hear his Word.

Beyond subsequent interpretations, there remains the representation that Witz has given of this encounter, isolating the two protagonists on the table, in order to offer to all those who contemplate it - and therefore also to us - a profound and singular way of seeing what the biblical story tells us. We could now reread the entire passage from the First Book of Kings by contemplating the two figures, keeping before us the representation of the two sovereigns: we will realise that the painter's rendering shows a specific angle to what we hear from the biblical story, presenting us with two figures who are in some ways exceptional: on the one hand Solomon, the ruler of Israel famous for his wisdom, and on the other the Queen of Sheba, whose name we do not know but for whom it will remain an everlasting memory for her beauty, wealth, curiosity and intelligence that brought her from the then known South of the world to Jerusalem.

After all, Jesus also praised her in the Gospel: “At the judgment the queen of the south will arise with this generation and condemn it, because she came from the ends of the earth to hear the wisdom of Solomon; and there is something greater than Solomon her” (Mt 12:42).