The peculiarity of Raphael's painting is not so much the subject (the Virgin was often represented with the little Jesus and his cousin John the Baptist) but the choice to set the scene in a completely open space. The panel was painted for Lorenzo Nasi, who wanted it in his Florence’s house on the occasion of his marriage to Sandra Canigiani, held on February 23, 1506.

The Nasi family was an important and wealthy family of Florentine merchants, specialised in importing raw fabrics from abroad, which were then finely worked and exported as fine fabrics. After a few decades, the precious painting was damaged by the collapse of the Nasi house on 12 November 1547. Recently, thanks to an important restoration, the painting regained its ancient beauty.

The scene is very simple. In a beautiful open space, the Virgin, who is reading, little Jesus between her legs, welcomes John, the son of her cousin Elizabeth, who has arrived from the left side of the painting. In the centre of the ideal triangle that we could trace with Mary's head as its vertex, we notice the little bird that also gives the name to the painting. It is a goldfinch, which was brought by John (he is still holding it in his hand) and is caressed by Jesus. We can notice the exchange of glances between the two children, as well as Mary’s look from above towards John. It is a look almost of amazement, because, according to the tradition, the goldfinch, together with the nightingale and the finch, tried to remove the crown of thorns from Jesus' head when he was crucified. The bird couldn’t do that, but from that moment on its plumage around his beak took the red colour from the blood of Christ, as a perennial testimony of the naive attempt of three little winged creatures to alleviate the stabbing pain of the Lord Jesus.

The presence of the goldfinch is therefore a clear reference to the Passion of Jesus. But this does not cause bewilderment or fear, as witnessed by the fact that Mary is caressing John and seems almost to hold him with her right hand. Moreover, Mary certainly remembered the words with which the prophet Simeon addressed her when together with Joseph she brought Jesus to the Temple of Jerusalem for the ritual presentation to the Lord: “Look, he is destined for the fall and for the rise of many in Israel, destined to be a sign that is opposed and a sword will pierce your soul too - so that the secret thoughts of many may be laid bare” (Lk 2:34-35).

We could add other considerations, for example on the range of colours - which culminate in the blue of the Madonna's mantle, almost reflected in the sky, or in the great variety of green of the lush spring landscape that reaches deep into the city in the background - or on what Raphael was able to borrow from the two greatest geniuses of his contemporaries (the pyramidal composition of Leonardo's Madonna and Child and St. Anne or the statue of the Virgin and Child that Michelangelo sculpted the previous year for a merchant in Bruges).

We’d like to conclude by returning to the tormented story of this painting. In 2008, a major restoration was completed, bringing back the original colour that the painting had before 1547. When the Nasi house collapsed, the chronicles of the time tell that the owner was more concerned to recover the fragments of the splendid work of Raphael than the rest. So, from the rubble of that house he recovered a magnificent testimony of culture, history, faith and beauty. In this time of pandemic, just like the owner of the painting, we can all be able to put back together the pieces of our lives, to return to life, smiles and joy.

In this month of May, traditionally dedicated to Mary, we entrust to Her our lives, our anxieties, hopes, sorrows - contemplating the Madonna of the Goldfinch - with an ancient antiphon that dates back to the early centuries of Christianity:

We fly to Thy protection,

Do not despise our petitions

but deliver us always 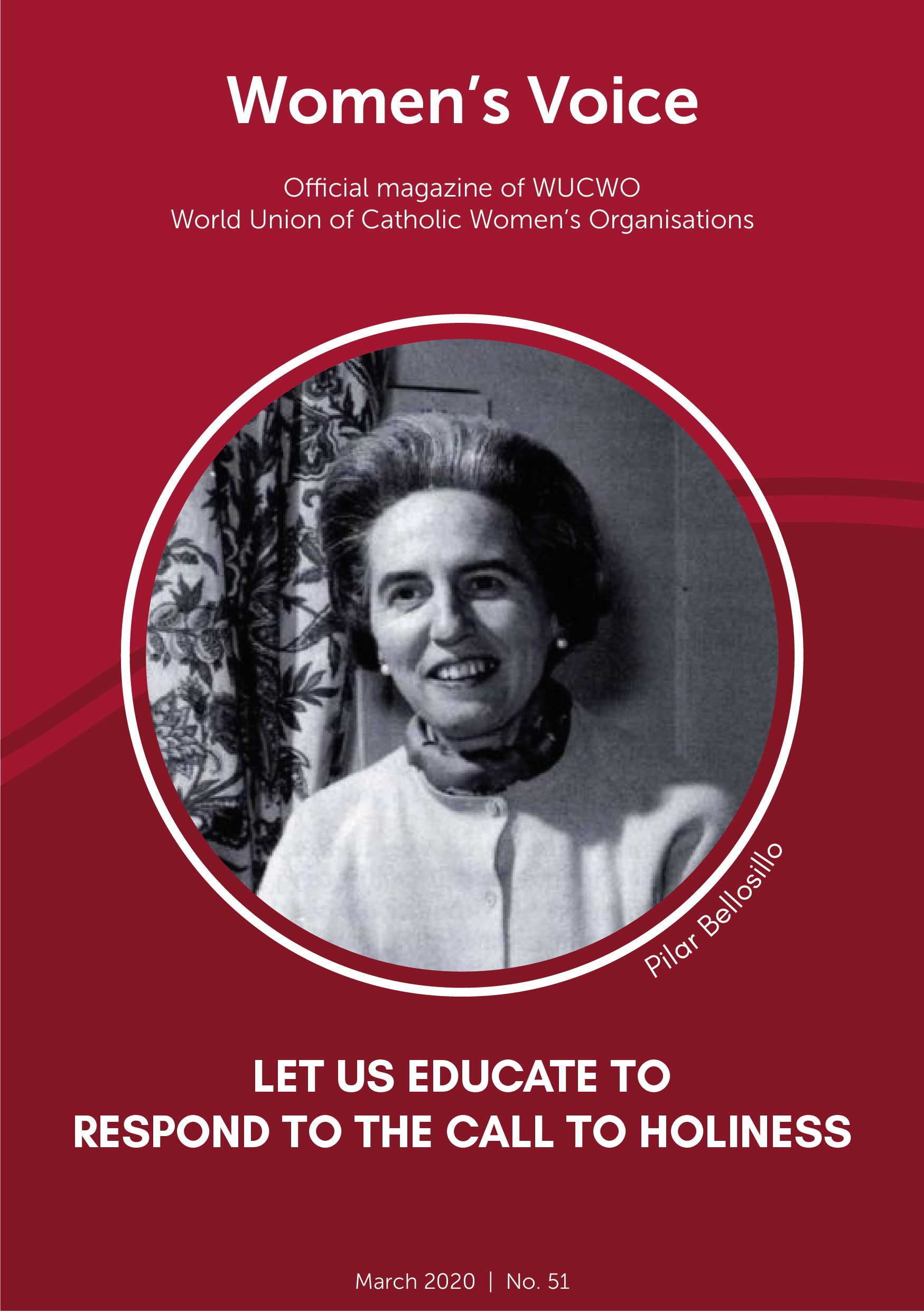 Voices from our Member Organisations which are testimony to the commitment of WUCWO´s members on the theme: "Let us educate to respond to the call to holiness."