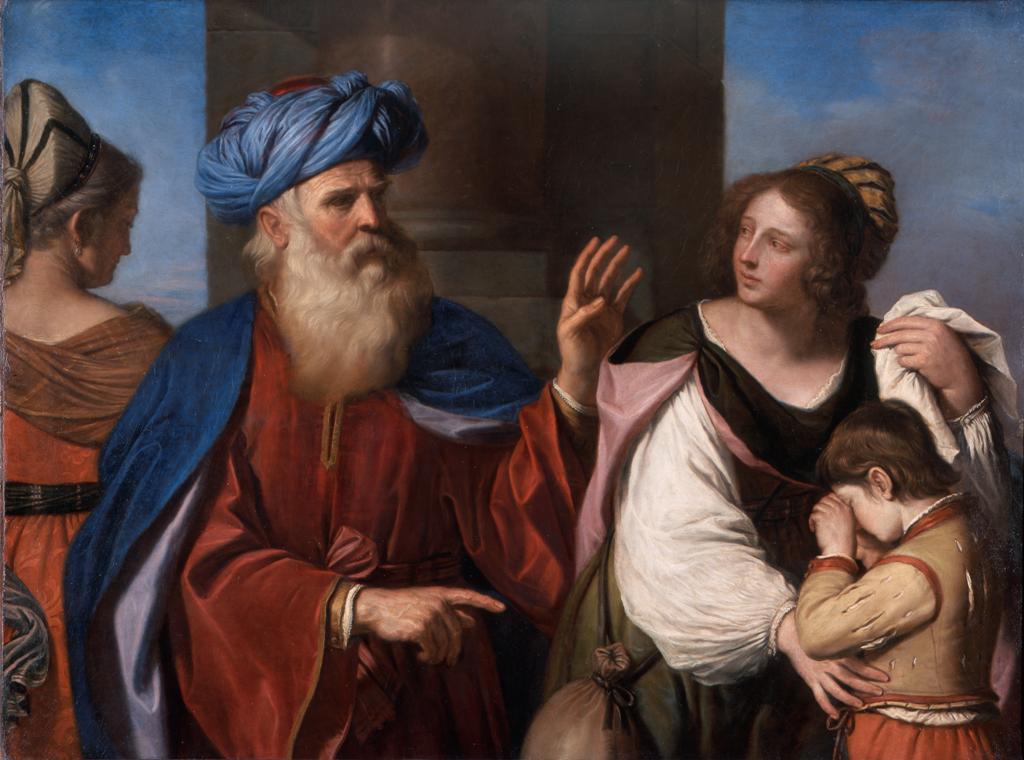 Women in the Old Testament: Hagar.

The origin of this painting is well known. It was commissioned by the community of Cento, who wanted to pay homage to the cardinal legate of Ferrara, Lorenzo Imperiali. We do not know the reason for the choice of subject, but we do know that what the painting shows us is narrated in chapter 21 of the Book of Genesis. Already in chapter 16 it is recounted that Sarah, Abraham’s wife, unable to have children, suggested to her husband that he give a son to his slave Hagar so that her husband could have an offspring. This is fulfilled and, although there is some tension between the two women, it is smoothed over by the intervention of the angel of the Lord. “Hagar bore Abraham a son, and Abraham gave his son borne by Hagar the name Ishmael. Abraham was eighty-six years old when Hagar bore him Ishmael” (Gen 16:15-16).

Nevertheless, after Sarah gave birth to Isaac, misunderstanding and jealousy arose in the family. Sarah asked Abraham to cast out Hagar and her son. The Bible tells us that “this greatly distressed Abraham, because the slave-girl’s child too was his son, but God said to him, ‘Do not distress yourself on account of the boy and your slave-girl. Do whatever Sarah says, for Isaac is the one through whom your name will be carried on. But the slave-girl’s son I shall also make into a great nation, for he too is your child.’ Early next morning, Abraham took some bread and a skin of water and, giving them to Hagar, put the child on her shoulder and sent her away. She wandered off into the desert of Beersheba” (Gen 21:11-14).

Guercino’s painting represents the dramatic moment of the estrangement and separation of Abraham and Hagar with their son Ishmael.

The scene is reduced to its essentials, with all the protagonists in the foreground, whereas in the background we can see a column and a blue sky, as if it were a stage set.

The first element that strikes us is that Sarah, on the left, is portrayed from behind, as if she were leaving. In fact, it was she who caused Hagar’s expulsion; it was she who asked and obtained from Abraham the casting out of Ishmael, by then a young man, from his little Isaac. The choice of not even showing her face seems almost to be a less than benevolent judgement of her on the part of the painter or of whoever commissioned the canvas.

The second element to be emphasised is the figure of Abraham. So many details show us that we are in front of the master of the house: the elegance of his dress, the care with which the cuffs showing under the wide sleeves are depicted, his well-groomed hands, the beautiful blue turban covering his head, the flowing white beard framing his now elderly face. He has now made his decision, as is shown by the index finger of his right hand with which he indicates to Hagar the direction to take, even if with his left hand we do not understand whether he intends to say goodbye to her and to his first son or to reassure them that he will not forget them both, also knowing the promise that God has made him regarding Ishmael.

Finally, we come to Hagar, prepared for her unknown destination, as witnessed by the skin of water she is carrying. She is presented to us as an elegant woman with high dignity. Her eyes are veiled in tears because she realises that the trial she is called to undergo is very demanding, because she hears little Ishmael clinging to her in tears, not understanding why he has to abandon his home, his games, his security. Hagar looks at Abraham, and in her gaze we can read disbelief, pain and amazement.

The story of Hagar ends quickly, and in the same chapter 21 of the book of Genesis we read that “God heard the boy crying, and the angel of God called to Hagar from heaven. ‘What is wrong, Hagar?’ he asked. ‘Do not be afraid, for God has heard the boy’s cry in his plight. Go and pick the boy up and hold him safe, for I shall make him into a great nation.’ Then God opened Hagar’s eyes and she saw a well, so she went and filled the skin with water and gave the boy a drink. God was with the boy. He grew up and made his home in the desert, and he became an archer. He made his home in the desert of Paran, and his mother got him a wife from Egypt” (Gen 21:17-21).

Hagar was therefore a strong woman, who was able to cope with the misfortunes of life, also because the benevolent presence of God never failed her and her son Ishmael.