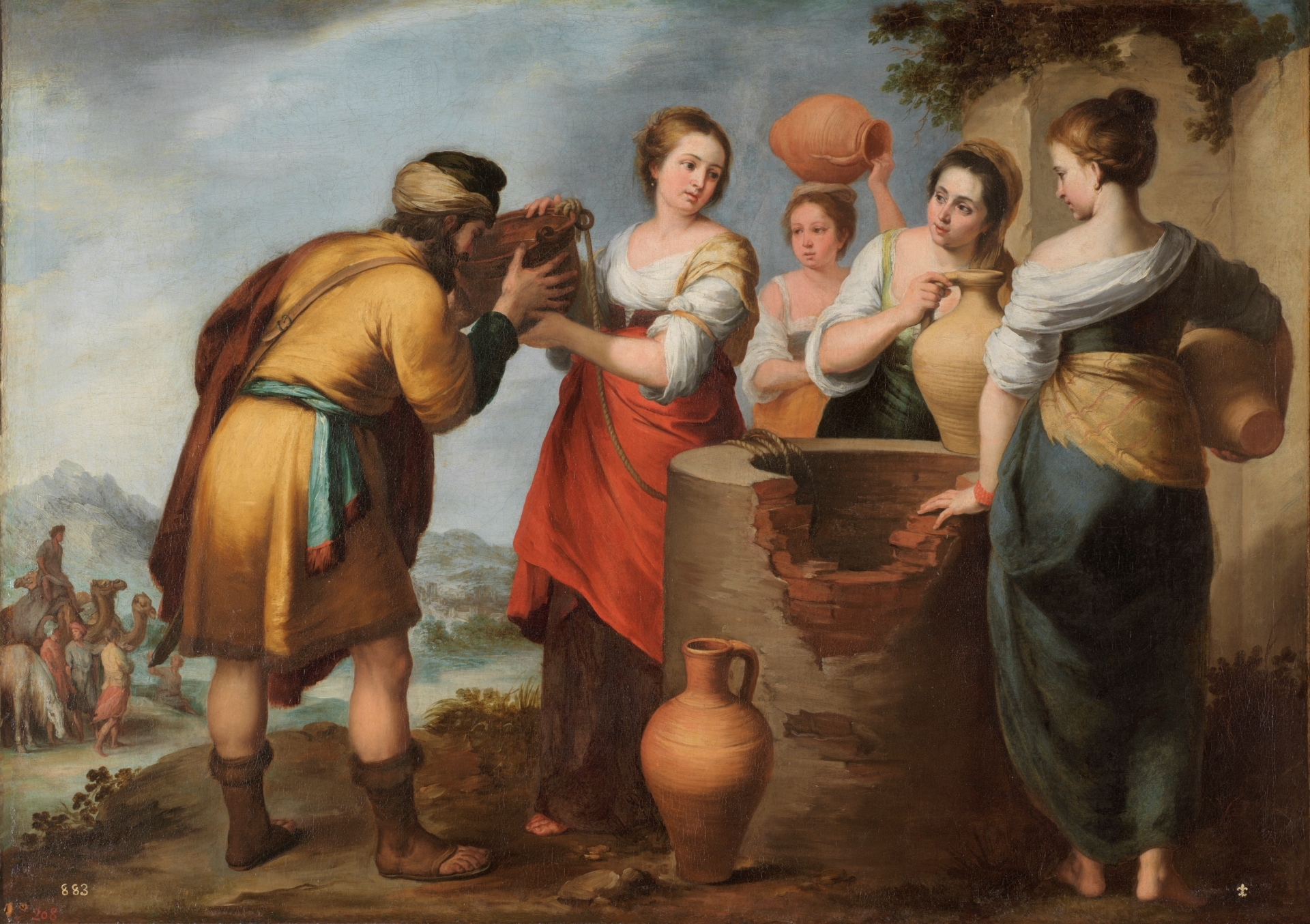 Women in the Old Testament: Rebecca.

The servant took ten of his master’s camels and, carrying all kinds of gifts from his master, set out for the city of Nahor in Aram Naharaim. In the evening, at the time when women come out to draw water, he made the camels kneel outside the town near the well. And he said, 'Lord, God of my master Abraham, give me success today and show faithful love to my master Abraham. While I stand by the spring as the young women from the town come out to draw water, I shall say to one of the girls, ‘Please lower your pitcher and let me drink.’ And if she answers, ‘Drink, and I shall water your camels too,’ let her be the one you have decreed for your servant Isaac; by this I shall know you have shown faithful love to my master’. He had not finished speaking when out came Rebecca -- who was the daughter of Bethuel son of Milcah, the wife of Abraham’s brother Nahor -- with a pitcher on her shoulder. The girl was very beautiful, and a virgin; no man had touched her. She went down to the spring, filled her pitcher and came up again. Running towards her, the servant said, ‘Please give me a sip of water from your pitcher.’ She replied, ‘Drink, my lord,’ and quickly lowered her pitcher on her arm and gave him a drink. When she had finished letting him drink, she said, ‘I shall draw water for your camels, too, until they have had enough’ (Genesis 24:10-19).

When Abraham imagines a wife for his son Isaac, he wishes that she could be from his home country, the “land of the two rivers”, Mesopotamia. He entrusts this task to a trusted servant (whom tradition identifies with Eliezer, mentioned in chapter 15), and off the servant goes. The scene described in the above excerpt is the one in which what was predicted happens: a girl gives the servant a drink and waters the camels. She is the one to whom the marriage proposal must therefore be made.

In this painting, Murillo, the great Spanish painter, depicts precisely the famous scene happening by the well. Some girls are at the well, performing a daily action: filling large pitchers with water and bringing them home for household chores. Rebecca’s pitchers, placed on the ground in front of the well, is at the centre of the painting, as is Rebecca herself, who looks to her left towards her friends while to her right she is giving a drink to the traveller who has asked her to quench his thirst. The camels are in the background.

The story of Rebecca then continues throughout chapter 24 of Genesis. In it we can see elements typical of the culture of the time, first and foremost the sacred value of hospitality. The pilgrim is sent by the Lord and therefore the house, the table, and one’s possessions must be made available to him.

In the story, praise and blessings, tales and acts of faith in the Lord God follow one another, until Bethuel and Laban – Rebecca’s father and brother respectively - decide to consent to their daughter, and sister, going to Abraham to be given in marriage to Isaac:

Accordingly, they let their sister Rebecca go, with her nurse, and Abraham's servant and his men. They blessed Rebecca and said to her:

‘Sister of ours, from you may there spring thousands and tens of thousands!

May your descendants gain possession of the gates of their enemies!’.

And forthwith, Rebecca and her maids mounted the camels, and followed the man. The servant took Rebecca and departed.

Let us return to the painting for a moment. We are at the beginning of Rebecca’s story, but the painter has already succeeded in emphasising her figure. He does this through her beauty, but also through her humble and demure demeanour, as well as through the red colour of her cloak tied at her waist that stands out among the vast array of browns and greens present.

The choice of representing Rebecca’s friends - of whom there is no trace in the biblical account - has a twofold purpose: on the one hand they are witnesses to what is happening, and on the other they provide psychological support to her friend, as shown by their glances and smiles.

Rebecca’s story will then feature other important moments, starting with the birth of the twins Esau and Jacob and their own story. Nevertheless, from the very first episode in which she appears, she already gives us the idea of a woman of great depth, capable of fully playing her role in salvation history.