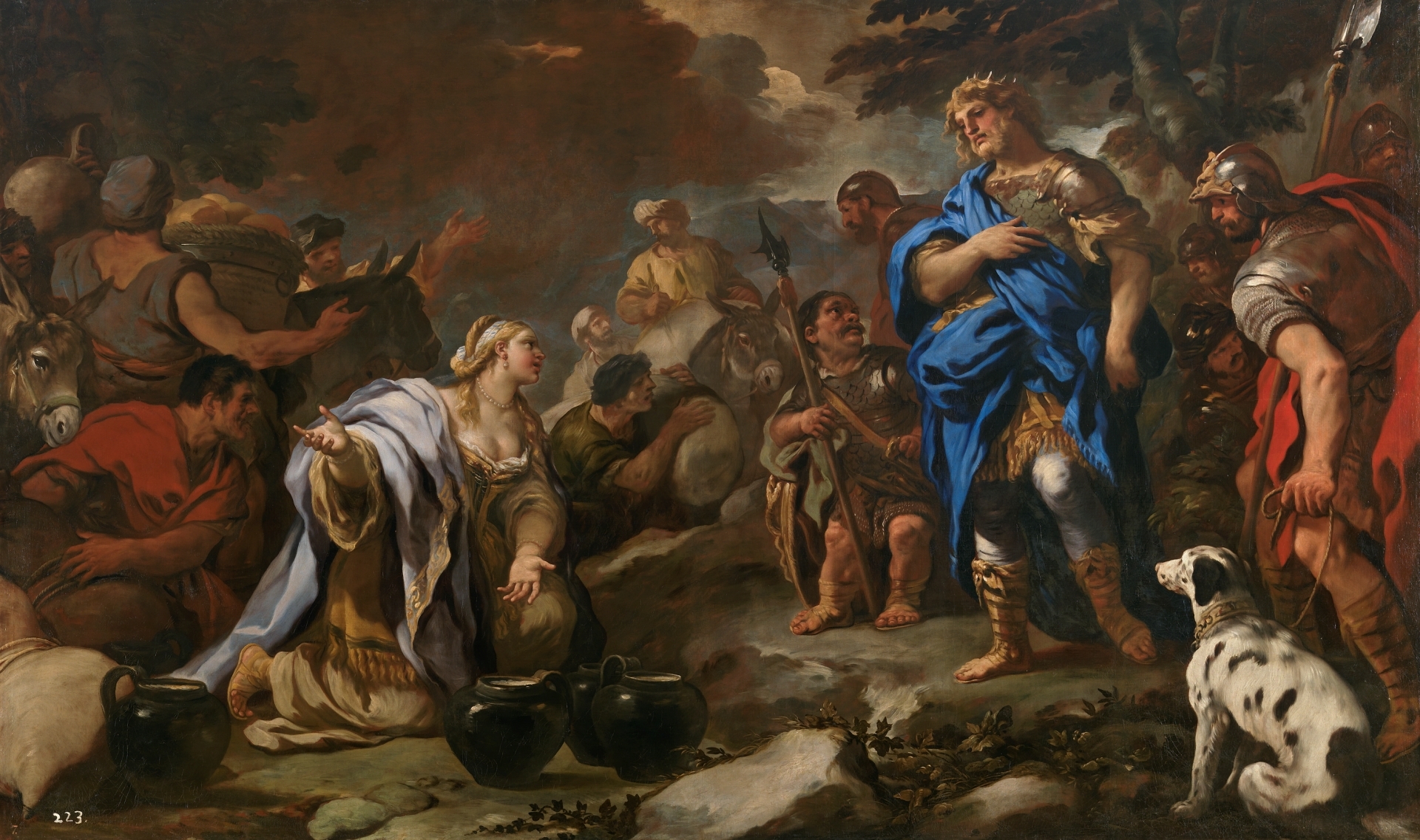 Women in the Old Testament: Abigail

Abigail hastily took two hundred loaves, two skins of wine, five sheep ready prepared, five measures of roasted grain, a hundred bunches of raisins and two hundred cakes of figs and loaded them on donkeys. She said to her servants, ‘Go on ahead, I shall follow you’ -- but she did not tell her husband Nabal. As she was riding her donkey down behind a fold in the mountain, David and his men happened to be coming down in her direction; and she met them. […]

As soon as Abigail saw David, she quickly dismounted from the donkey and, falling on her face in front of David, prostrated herself on the ground. She fell at his feet and said, ‘Let me take the blame, my lord. Let your servant speak in your ear; listen to what your servant has to say! My lord, please pay no attention to this brute Nabal for his nature is like his name; “Brute” is his name and brutal he is. But I, your servant, did not see the men whom my lord sent. And now, my lord, as the Lord lives and as your soul lives, by the Lord who kept you from the crime of bloodshed and from taking vengeance with your own hand, may your enemies and all those ill-disposed towards you become like Nabal. As for the present which your servant has brought my lord, I should like this to be given to the men in your service. Please forgive your servant for any offence I have given you, for the Lord will certainly assure you of a lasting dynasty, since you are fighting His battles and no fault has been found in you throughout your life’ (I Samuel 25:18-20; 23-28).

The episode narrated in the first book of Samuel occurs when David, already anointed king by the prophet but not yet recognised as such, is fleeing from Saul and at the same time fighting against the Philistines. It is a delicate moment, because Samuel has recently died. David had sent messengers to the wealthy Nabal who, however, had responded badly to the future king of Israel. Nabal’s wife, Abigail, who realises the danger to her house, takes the initiative and, unbeknownst to her husband, goes to David with rich gifts.

The large painting that Luca Giordano executed for the Spanish royal family and which was placed in the Royal Palace (but came from the Buen Retiro Palace) represents the moment of the meeting between David and Abigail. The painting is divided into two parts. On the right we can see David - already wearing the crown although not yet formally king - with several characters that remind us of a court (a soldier, a dwarf/buffoon, a dog...); whereas on the left there is Abigail who, kneeling, presents her gifts, contained in the jugs in front of her but also on the donkeys that can be glimpsed in the background. The scene is crowded with numerous characters, although David and Abigail stand out in terms of brightness and richness of detail.

We can see that Abigail’s move was successful from David’s attitude, for he looks at her benevolently. That is why David’s response to Abigail’s request for mercy is very clear and promising: ‘Blessed be the Lord, God of Israel, who sent you to meet me today! Blessed be your wisdom and blessed you yourself for today having restrained me from the crime of bloodshed and from exacting revenge! But as the Lord, God of Israel, lives, who prevented me from harming you, had you not hurried out to meet me, I swear Nabal would not have had a single manjack left alive by morning!’ David then accepted what she had brought him and said, ‘Go home in peace; yes, I have listened to you and have pardoned you’ (I Samuel 25:32-35).

There is one detail that more than any other highlights to the observer the calm and constructive tenor of the dialogue between the two protagonists: the hands. Those of Abigail indicate the gifts and the path travelled, while those of David, particularly the right one, seem to give a sense of security to the woman.

What we are told about Abigail at the beginning of chapter 25, namely that “she was a woman of intelligence and beauty” (v. 3b), touched David so deeply that, on learning of Nabal’s death ten days after his meeting with his wife, he asked and obtained to marry Abigail herself.