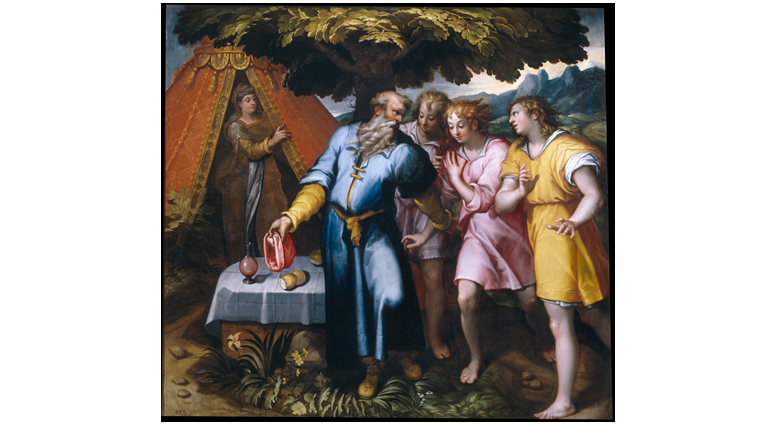 Women of the Old Testament: Sarah.

The Lord appeared to Abraham by the terebinth of Mamre, as he sat in the entrance of his tent, while the day was growing hot. Looking up, he saw three men standing nearby. When he saw them, he ran from the entrance of the tent to greet them; and bowing to the ground, he said: "Sir, if I may ask you this favor, please do not go on past your servant. Let some water be brought, that you may bathe your feet, and then rest yourselves under the tree. Now that you have come this close to your servant, let me bring you a little food, that you may refresh yourselves; and afterward you may go on your way." "Very well," they replied, "do as you have said." Abraham hastened into the tent and told Sarah, "Quick, three seahs of fine flour! Knead it and make rolls." He ran to the herd, picked out a tender, choice steer, and gave it to a servant, who quickly prepared it. Then he got some curds and milk, as well as the steer that had been prepared, and set these before them; and he waited on them under the tree while they ate. "Where is your wife Sarah?" they asked him. "There in the tent," he replied. One of them said, "I will surely return to you about this time next year, and Sarah will then have a son." Sarah was listening at the entrance of the tent, just behind him. Now Abraham and Sarah were old, advanced in years, and Sarah had stopped having her womanly periods.So Sarah laughed to herself and said, "Now that I am so withered and my husband is so old, am I still to have sexual pleasure?" But the LORD said to Abraham: "Why did Sarah laugh and say, 'Shall I really bear a child, old as I am?’ Is anything too marvelous for the LORD to do? At the appointed time, about this time next year, I will return to you, and Sarah will have a son." Because she was afraid, Sarah dissembled, saying, "I didn't laugh." But he said, "Yes you did." (Gen 18:1-15)

Calvaert's painting shows us the scene described in the chapter of the book of Genesis above. Even visually we are struck by how rich the canvas is: Abraham with the three angels in the foreground, the table laid, the beautiful landscape in the background and the large tree under whose branches not only has found its place the table, but also Abraham's tent. And from the tent, as the biblical passage tells us, comes Sarah, Abraham's wife, now resigned to the impossibility of giving her beloved husband a child. She knows that what she has heard from the three characters will not come true. It is not possible to go against nature, it is not possible for a child to be born of old parents. That is why she allows herself to laugh and smile at the naivety of the three young angels.

One aspect I would like to highlight now is not so much the dialectic between the little faith of the two elders and the fact that nothing is impossible to the Lord, but rather is the difference in the planes in which Sarah and Abraham are placed in the painting and in the history of salvation.

Again, the close-up is reserved for Abraham, the man, the breadwinner. He is the one who welcomes the three angels, he is the one who invites them, feeds them, has prepare the flat bread and cook the veal specially sacrificed for them. Sarah, on the other hand, is in the background, looking out from the curtain in her beautiful dress, seeming to observe from afar what appears to be the protagonists of the scene.

This is the situation we often find in a patriarchal society: the woman is always one step behind, even though she is often the one who supports and governs the family: who, for example, kneads the flour and makes the flat bread? If they had waited for Abraham, the three young men would probably have remained on an empty stomach!

Significantly, the conversation between Abraham and his three guests finally turns to Sarah. Abraham's wife is in the tent, but even in this hidden place she has found grace with God, who is preparing to give her the most important gift for a woman of her time: a son, who will be born in spite of sterility and old age. It is Sarah who is under the spotlight, it is she who sees the consideration accorded to her substantially changed: no longer is just the wife of the patriarch, but now also the mother, the one who will give birth to the child who will continue the family line.

How much did Sarah have to tolerate during those years? How many ironic smiles, how much mocking, how many murmurs? But now, a new life begins, which the Lord has given her, a pledge of devotion and benevolence.