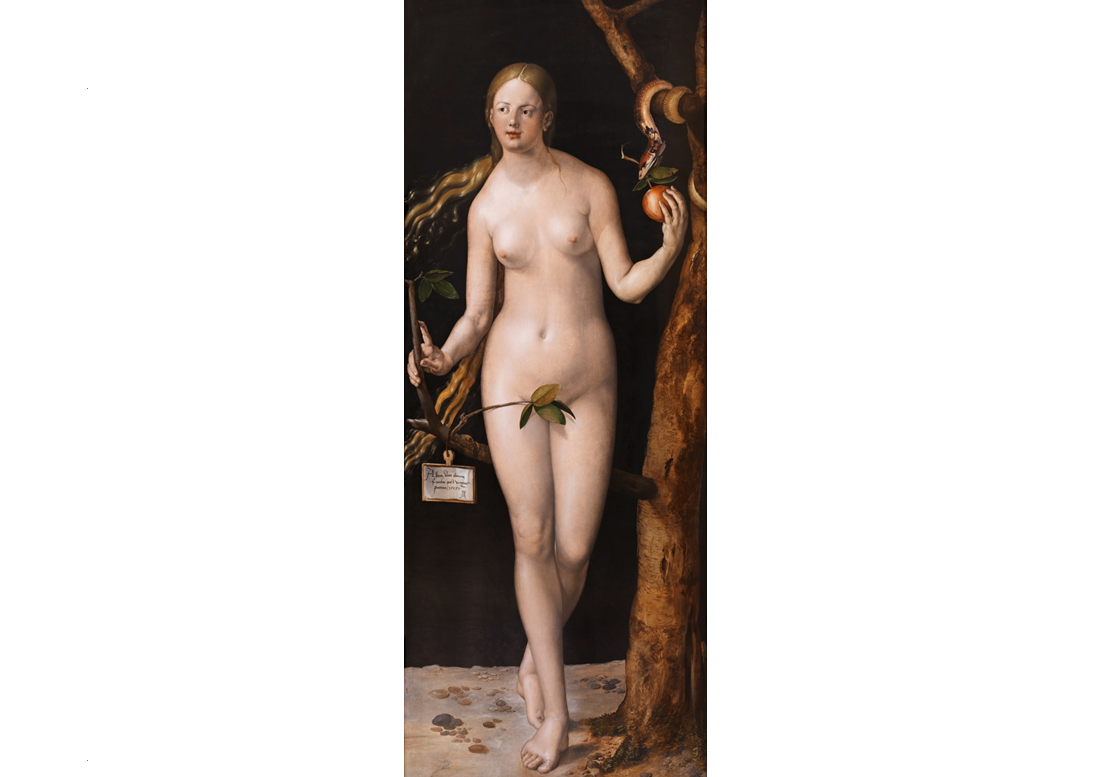 Women of the Old Testament: Eve.

Our journey through the Old Testament concludes by returning to the beginning of the Bible, to the first woman we meet, the one who is called Eve because she became the mother of the living.

She begat Cain and Abel to Adam, lived the drama of disobedience to God, of the loss of a son at the hands of the other son. Yet the moment that the Great German painter captures is still that of beauty and perfection: Eve already has the fruit in her hand that the cunning serpent is offering her, but she hasn’t eaten any yet, she hasn’t brought it to Adam yet. She is still the woman in her fullness. And after all even nudity does not cause any disturbance, because it is still inserted in the context of the garden of Eden where God had placed the ancestors to cultivate and look after it; infact the Bible reminds us: “The man and his wife were both naked, yet they felt no shame.” (Gen 2, 25).

A detail not to be underestimated, contemplating this large table (it is over two meters high, practically life-size) is knowing that there is a painting of the same characteristics but depicting Adam, also preserved in the Prado Museum, which Dürer painted for the same client. The two paintings have therefore been together for over 500 years!

About Eve’s figure we are first of all struck by the care that the painter has reserved for individual details: the beautiful color of the complexion, the flowing hair that seems to be blown by a wind which, however, we do not notice, the perfection of the face with the well-groomed eyebrows, rosy lips, a perfect nose, dark eyes that seem affected by a slight strabismus which in ancient times was considered synonymous with beauty (the so-called “Venus strabismus”).

The scene is completely dominated by Eve, the background is dark as if to further highlight the light  of her body, on the left and along the entire height of the table you can see the tree from which the snake picked the fruit which then handed over to the woman, the earth on which Eve seems to walk is bare, we see only dust and stones.

Another very important detail is the inscription we read in the scroll that hangs from a branch that starts from the lower part of the trunk and that also serves as a support for Eve. It is the writing with which the painter signs the painting and tells us the date on which he made it. We read: “Alberto dürer almano / faciebat post virginis / partum – 1507 - / AD [anagram]”. The fact that the painter tells us that the painting was done 1507 years after the birth of the Virgin Mary (and not “post Christum natum”, after the birth of Christ, as we would have expected) is intended: Mary is the new Eve, the one who, by bringing Christ to humanity, has forever become “mother of all the living”.  In this way, with the physical presence of Eve and the serpent and the presence evoked by Mary’s scroll, the word that God pronounces addressing the serpent after the sin committed by Eve and Adam finds its fulfillment here too: “I will put enmity between you and the woman, and between your offspring and hers; they will struck at your head while you strike at their heel” (Gen 3, 15).

Eve, figure of Mary, Mary mother of Jesus. In these two women we find the synthesis of the history of salvation.