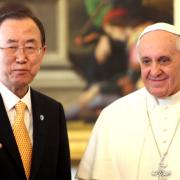 Pope Francis met  with United Nations Secretary General Ban Ki-moon along with his wife and members of his entourage at the Apostolic Palace of the Vatican. Secretary-General Ban also met with Cardinal Tarcisio Bertone, the Vatican Secretary of State, along with Archbishop Antoine Camilleri, under-Secretary for the Holy See’s Relations with States.