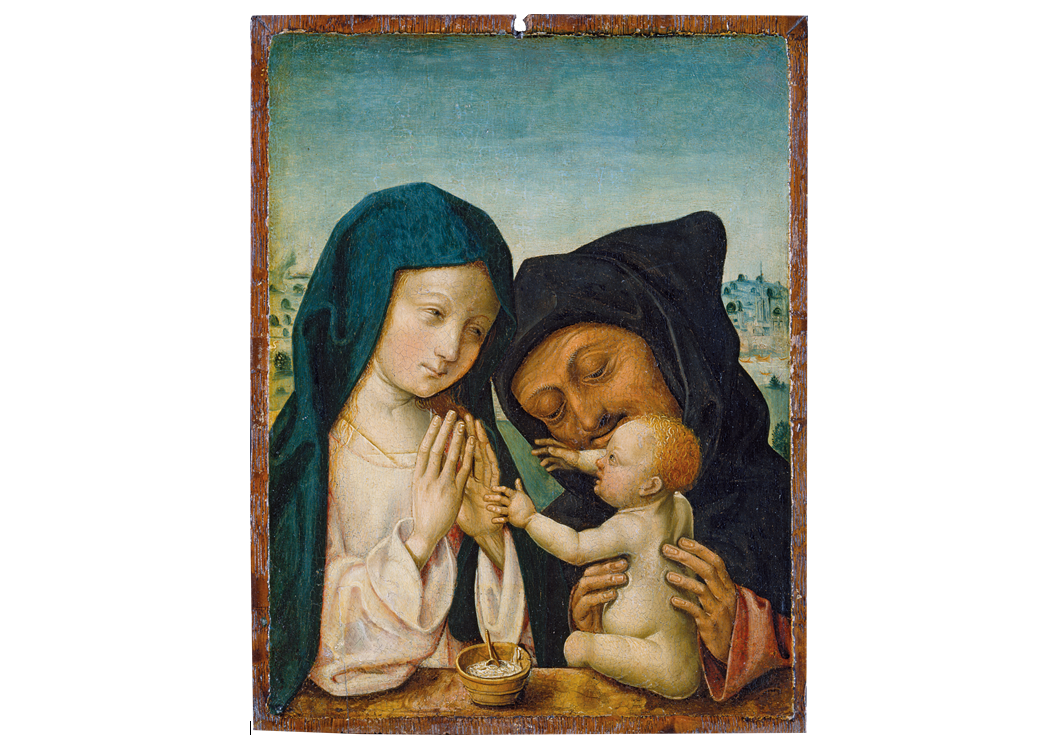 We do not know the name of the painter who painted this exquisite scene. He takes his name from a triptych - now in the Alte Pinakothek in Munich, Germany - depicting St Bartholomew and 6 other saints, originally placed in the Carthusian monastery in Cologne, as evidenced by the depiction of a Carthusian monk kneeling in the middle, next to St Bartholomew, then moved to the church of St Columba, in Cologne, at the behest of a wealthy city merchant.

Unlike the triptych from which the painter takes his name, this panel was certainly painted for the purpose of private devotion. This is attested both by its size (the painting is smaller than A4 size) and above all, it seems to me, by the everyday nature of the scene. The child Jesus must probably be eating a milk soup, which we see in the wooden bowl resting on the windowsill, where Jesus himself is sitting: he is reaching out his hands to Mary, his mother, who seems absorbed in contemplating her very special son, and he is supported by Joseph, who is looking at him with deep love.

The three figures occupy almost the entire scene. The background is minimal, a city on the right and green countryside on the left. The colours have been carefully chosen: the Virgin Mary wears a soft pink tunic and a dark blue cloak, whereas Joseph has a black tunic with a very deep pink sleeve. If Mary and Jesus, with their complexion and blond hair, remind us of Nordic types, Joseph, with his dark complexion, makes us think of someone from southern Europe.

If we also consider that our painter began his artistic career as an illuminator (he is the author of the 13 full-page miniatures in a book of hours of 182 sheets of parchment - 364 pages - belonging to Sophia van Bylant, now in the Wallraf-Richartz Museum in Cologne, Germany), we are not surprised by the skill with which he painted the hair of Jesus and Mary or Joseph's eyelashes and eyebrows.

The Holy Family, as portrayed by the Master of the Saint Bartholomew Altarpiece, may resemble many families in the industrious city of Cologne in the early 16th century.

This small painting certainly witnessed the prayers of tender and apprehensive mothers, of generous and hard-working fathers, and of playful sons and daughters.

As we contemplate this beautiful painting, we gratefully remember our parents and pray for all families, especially those who are experiencing difficult times because of the pandemic.

“Joseph saw Jesus grow daily ‘in wisdom and in years and in divine and human favour’ (Lk 2:52). As the Lord had done with Israel, so Joseph did with Jesus: he taught him to walk, taking him by the hand; he was for him like a father who raises an infant to his cheeks, bending down to him and feeding him (cf. Hos 11:3-4).

In the synagogue, during the praying of the Psalms, Joseph would surely have heard again and again that the God of Israel is a God of tender love, who is good to all, whose ‘compassion is over all that he has made’ (Ps 145:9).”