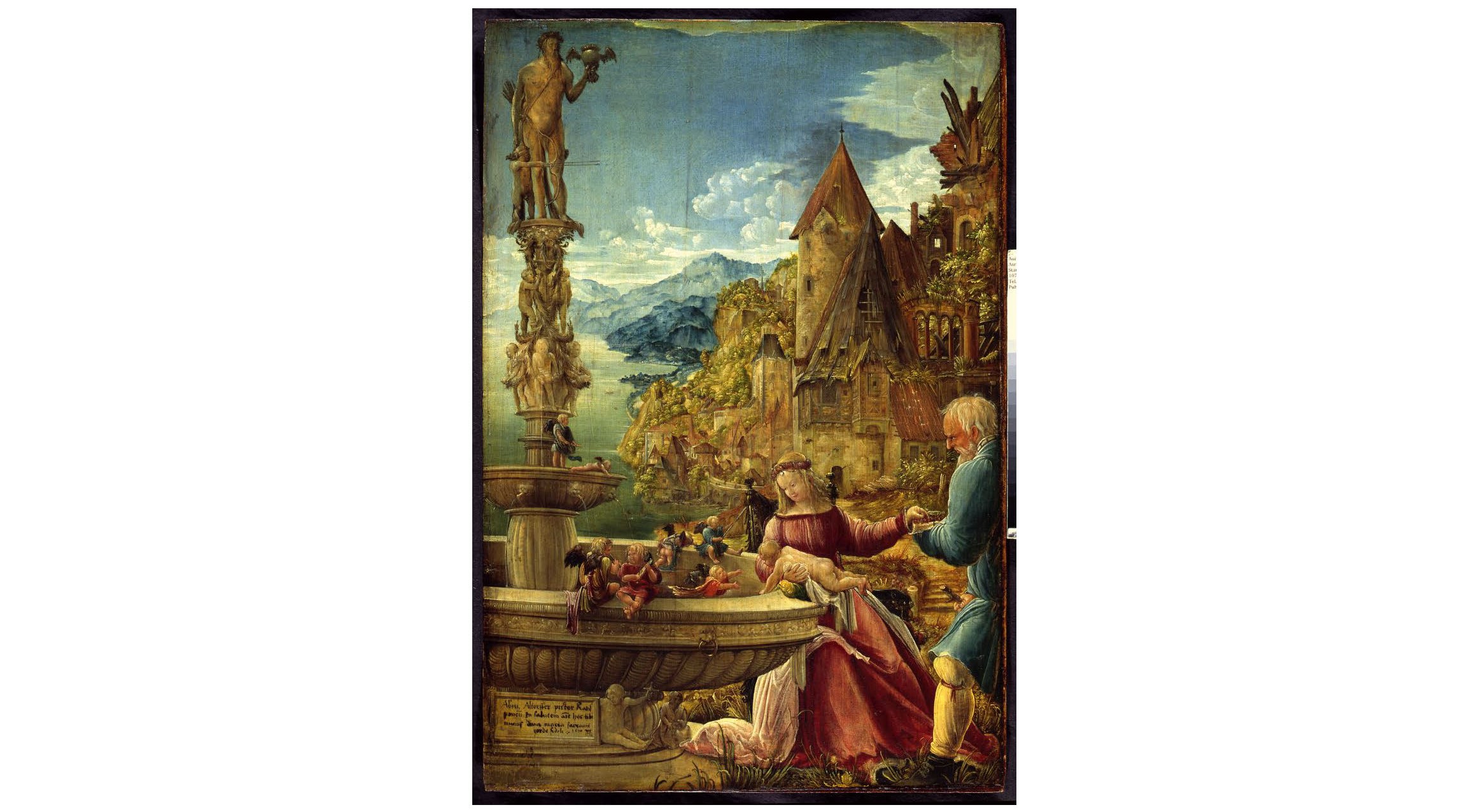 This small painting is above all a painter’s act of faith and devotion. This can be seen in the inscription with which he signed the work, in the bottom left corner, on the round base of the fountain's basin: ‘The painter Albert Altdorfer of Regensburg has consecrated this gift for his salvation to you, Holy Mary, with a faithful heart.’ I am moved by his desire to put his talent for painting at the service of his salvation. And he does it in a commendable way with a small but very elaborate work.

It seems a Danubian landscape, reminding us of the Black Forest, where the Danube is born; also, let us not forget that the great river crosses Regensburg, the city where Altdorfer spent his entire life. The architecture and clothes are contemporary with the painter, as is the armchair on which Mary is sitting. The fountain is presented to us as a complex Renaissance work, with sculptural elements reminiscent of classical antiquity. Behind the Holy Family are crumbling buildings, which seem to allude to past times (the Old Covenant and paganism) which, with the incarnation of Christ, have been overcome forever.

Let us now focus on the protagonists of the scene: Mary, Joseph and the baby Jesus. Although the flight into Egypt was certainly hasty and, in some ways, tragic, the painter has captured the family in a serene moment. This state of grace is underlined by the presence of several little angels who seem to want to play with the baby Jesus, as well as entertain him with musical instruments. They are represented in different positions, playing with the water of the fountain or sitting on its structure. Jesus is also attracted by the water, to which he reaches out, firmly held by his mother to prevent him from falling in and exposing himself to danger. Mary is seated in an armchair, which is certainly a far cry from the throne that so many paintings of the same period have accustomed us to. Joseph, the husband and the father, hands his wife some cherries, which he has picked up in the surroundings he explored, as can be seen from the stick he holds in his right hand. His gaze is lovingly directed towards Jesus, the son he risked losing through Herod's wickedness and who is now safe thanks to the warning he received in a dream from the angel.

There are many symbolic references for which we can speculate or imagine meanings: the fountain resembling certain baptismal fountains, the water with its baptismal, lustral or penitential value, the cherries with their red colour (blood?), the buildings in ruins. Nevertheless, I believe that the thing that impresses us most is that the theme of the painting (rest on the flight into Egypt) for the painter became almost a pretext for contemplating Jesus, Joseph and Mary in the sweetness and happiness of their family life.

As we read the infancy narratives, we may often wonder why God did not act in a more direct and clear way. Yet God acts through events and people. Joseph was the man chosen by God to guide the beginnings of the history of redemption. He was the true “miracle” by which God saves the child and his mother. God acted by trusting in Joseph’s creative courage. Arriving in Bethlehem and finding no lodging where Mary could give birth, Joseph took a stable and, as best he could, turned it into a welcoming home for the Son of God come into the world (cf. Lk 2:6-7). Faced with imminent danger from Herod, who wanted to kill the child, Joseph was warned once again in a dream to protect the child, and rose in the middle of the night to prepare the flight into Egypt (cf. Mt 2:13-14).