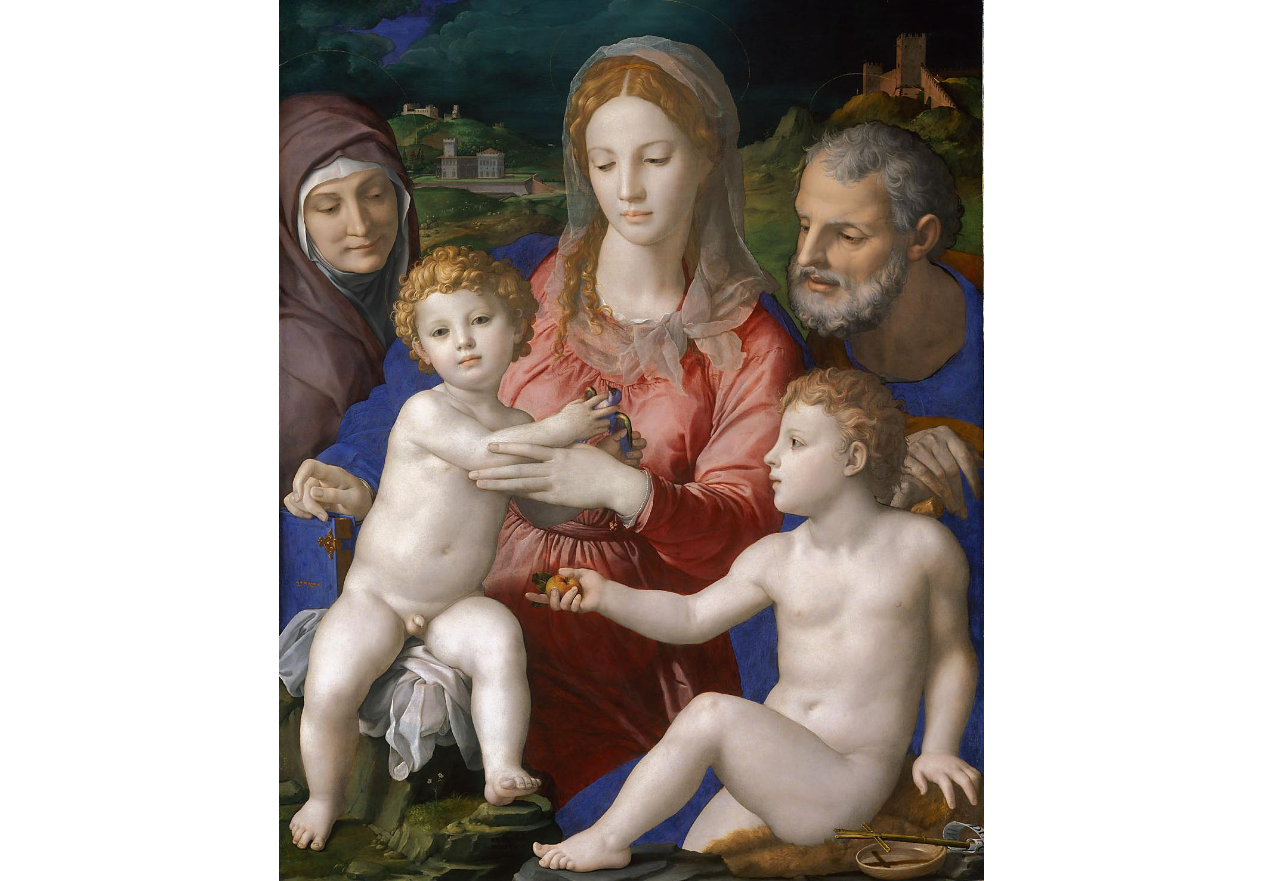 Today we contemplate on this mature painting by Bronzino, who became one of the favourite painters of the Medici, the family that ruled Florence. The fact that the painter was by then famous is also shown by the signature: on the stone under the left foot of Jesus we can read BROZINO FIORENTINO (Bronzino of Florence).

The first thing we notice is the presence of two characters in addition to the traditional representation of the Holy Family: in the foreground, the little John the Baptist (he is sitting on a skin of an animal, and near his left hand we notice both a small cross with the cartouche “Ecce agnus Dei” and a bowl that recalls baptism), and, in the background, on the left side of the painting, Saint Anne. If the presence of the former is no real surprise (St. John the Baptist is the patron saint of Florence), it is less known that St. Anne was also elected patron saint of the city of Florence in 1343, and the Medici themselves chose her as the patron saint of their family in the early sixteenth century. All this leads us to believe that the painting was made for the private devotion of some member of the Medici family, the lords of Florence.

The play of glances is also particular and important. Only Jesus stares at us spectators, holding a little bird that he may have been playing with; his gaze is on each of us and seems to be asking to look at him because he is our Saviour. Indeed, the gaze of all the characters in the painting is already turned towards him: that of Mary, who seems a little worried; that of John, which is accompanied by a gesture of offering and indication; those of Anne and Joseph, who share a veiled smile of satisfaction. They all look to him because they have all - in different ways - waited for and desired this child, whose existence has been very special since his conception. So, Jesus - who in this painting is not at the centre of the composition, which is occupied instead by Mary in her beautiful iridescent red dress and the fine veil with which she covers her hair - becomes the focal point to which all the lines converge.

If we then focus on the painting technique, we can see that Bronzino used somewhat cool colours and very sharp, defined outlines. This choice could be a sign of the dispute that animated the art world in the mid-16th century: whether painting or sculpture was superior. Bronzino seems to be telling us that painting is superior because it is able to make figures represented in the two dimensions of a painting look like three-dimensional statues.

The Polish writer Jan Dobraczyński, in his book The Shadow of the Father, tells the story of Saint Joseph’s life in the form of a novel. He uses the evocative image of a shadow to define Joseph. In his relationship to Jesus, Joseph was the earthly shadow of the heavenly Father: he watched over him and protected him, never leaving him to go his own way. We can think of Moses’ words to Israel: “In the wilderness… you saw how the Lord your God carried you, just as one carries a child, all the way that you travelled” (Deut 1:31). In a similar way, Joseph acted as a father for his whole life.

Fathers are not born, but made. A man does not become a father simply by bringing a child into the world, but by taking up the responsibility to care for that child. Whenever a man accepts responsibility for the life of another, in some way he becomes a father to that person.