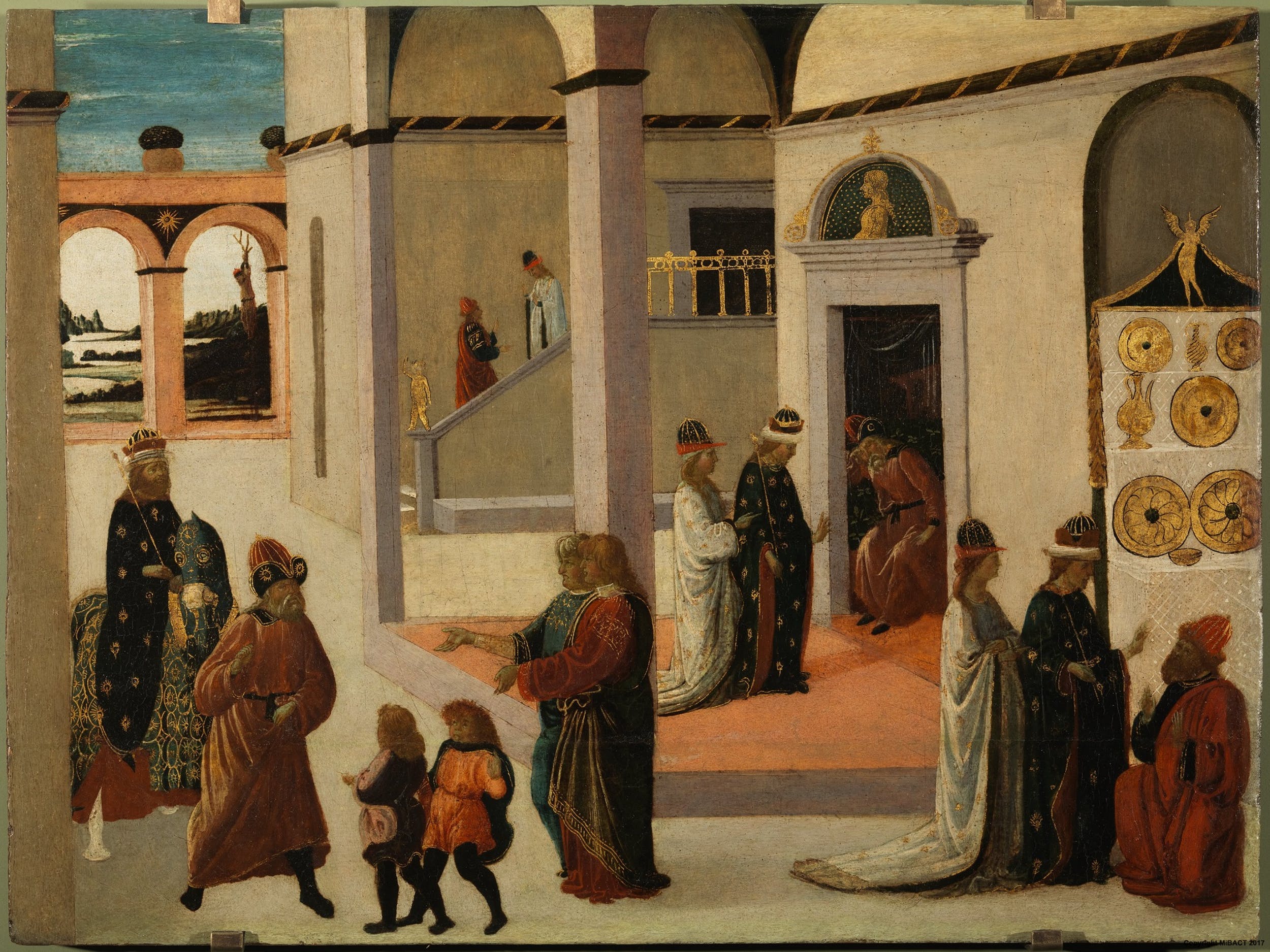 Women in the Old Testament: Esther.

The story of Esther is told in the book of the same name in the Bible. It consists of 10 short chapters which tell of Aman, a powerful prince at the court of King Ahasuerus (better known by the name of Xerxes), and his evil intention to destroy all the Jews living on Persian territory, in order to take revenge on Mordecai, a Jew who had refused to bow down at his feet.

God’s intervention in favour of his people came through Esther, a young Jewish woman chosen by the king as queen and who was Mordecai’s niece, who had adopted her as his daughter and brought her up under his tutelage.

The small painting, which is not easy to read, basically presents three characters: Mordecai, Queen Esther and King Ahasuerus. Esther is not the absolute protagonist, although she appears three times in the panel (she is recognisable by her white dress and crown with a red flap). This is because the painting depicts several episodes - the final ones - of the story told in the biblical book: Esther and Mordecai on the staircase, in the background, the triumph of Mordecai on his horse and with the king’s robe and crown, on the left (cf. Esther 6:6-11), the death of Aman, in the background on the left beyond the arch (the episode is told in chapter 7 of the book), the homage paid by King Ahasuerus and Queen Esther to Mordecai, in the foreground on the right.

The painting in question is the last in a series of five that Jacopo del Sellaio painted to probably decorate a chest of drawers intended to contain the dowry of some noble Florentine young woman.

The other four (two are kept in the Uffizi, a third in the Louvre in Paris and the fourth in the Museum of Fine Arts in Budapest) depict respectively:

-        The Banquet of Ahasuerus (https://www.uffizi.it/en/artworks/banquet-ahasuerus)

-        The Banquet of Vashti (https://www.uffizi.it/en/artworks/banquet-vashti)

The singularity of this exceptional group of paintings highlights an aspect that was widespread during the Renaissance: the figure of Esther became an example of a virtuous wife, capable of interceding with her husband on behalf of her people while respecting the truth and exposing lies and violence.

Esther is the one who was able to overturn the fate that, due to Aman’s wickedness, had already decided the extermination of the Jewish people throughout the Persian empire and set a date: the 13th of the month of Adar! Thanks to Esther’s supplication, which intercedes for her people and changes the king’s heart and the course of history, the Jews of Susa and the entire empire are saved and can continue to live in peace. Esther's plea was courageous because the law forbade her - on pain of death - to go to the king unless expressly invited. Yet, after three days of fasting, she makes the decision and goes. She goes, organises a banquet for the king and his dignitaries, denounces Aman’s deception, intercedes for her people, exalts Mordecai’s loyalty, and obtains vengeance from Ahasuerus and the salvation of all the Jews.

Even today, after more than 2,500 years, the Jews remember this fact on the feast day of Purim. After a day of fasting on the 13th of Adar, the feast day finally arrives, during which the Jews are required to attend the unabridged reading of the Book of Esther (it is one of the obligatory precepts), but also to give gifts to the needy, to send food to two different people and to participate in a festive banquet. The essence of the feast finds its origin in the Book of Esther, where in chapter 9 (vv. 17-32) the meaning and the ritual of the feast itself is precisely described.

Esther, one of the very few women after whom a book of the Bible is named, is thus presented to us as an authentic heroine.

A proposal for this month of May: let us take the Bible in our hands and read (or re-read) the story of Esther, accompanied by Jacopo del Sellaio’s evocative representations. In this way, we can deepen our knowledge of a great woman who marked the history of an entire people.