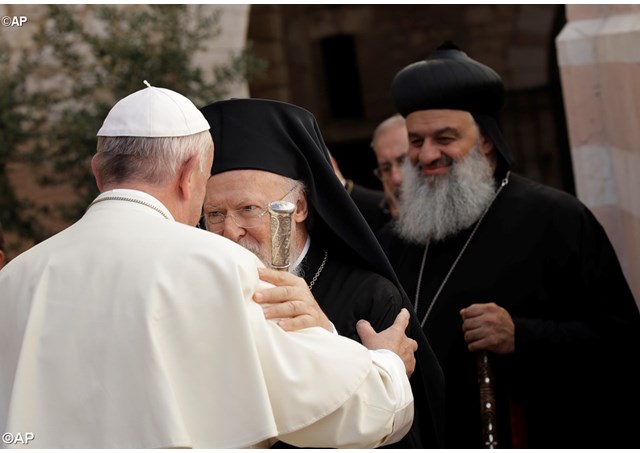 On September 20th 2016 the World Day of Prayer  for Peace “Thirst for peace: faiths and cultures in dialogue” was held in Assisi. During this event Pope Francis in his address encourages us react to the “virus that paralyses, rendering us lethargic and insensitive, a disease that eats away at the very heart of religious fervour, giving rise to a new and deeply sad paganism: the paganism of indifference. We cannot remain indifferent. Today the world has a profound thirst for peace. In many countries, people are suffering due to wars which, though often forgotten, are always the cause of

As WUCWO women how can we stop such virus?

Continuing with the comment about the single letters of the word MISERICORDIA (mercy)made by Pope Francis we arrive at the letter D:  diligence and attentiveness. He suggests that “the more we trust in God and his providence, the more we grow in diligence and readiness to give of ourselves, in the knowledge that the more we give the more we receive. What good would it do to open all the Holy Doors of all the basilicas in the world if the doors of our own heart are closed to love, if our hands are closed to giving, if our homes are closed to hospitality and our churches to welcome and acceptance. Attentiveness is concern for the little things, for doing our best and never yielding to our vices and failings. Saint Vincent de Paul used to pray: “Lord, help me to be always aware of those around me, those who are worried or dismayed, those suffering in silence, and those who feel alone and abandoned”.

In Assisi the Holy Father stated that “We believe  in the meek and humble strength of prayer. On this day, the thirst for peace has become a prayer to God, that wars, terrorism and violence may end. The peace which we invoke from Assisi is not simply a protest against war, nor is it ‘a result of negotiations, political compromises or economic bargaining. It is the result of prayer’. We seek in God, Who is the source of communion, the clear waters of peace for which humanity thirsts: these waters do not flow from the deserts of pride and personal interests, from the dry earth of profit at any cost and the arms trade.”

APPEAL at the World Day for prayer for Peace in Assisi

Men and women of various religions, we gather as pilgrims in the city of Saint Francis. Thirty years ago in 1986, religious representatives from all over the world met here at the invitation of Pope John Paul II. It was the first such solemn gathering that brought so many together, in order to affirm the indissoluble bond between the great good of peace and an authentic religious attitude. From that historic event, a long pilgrimage was begun which has touched many cities of the world, involving many believers in dialogue and in praying for peace. It has brought people together without denying their differences, giving life to real interreligious friendships and contributing to the resolution of more than a few conflicts. This is the spirit that animates us: to bring about encounters through dialogue, and to oppose every form of violence and abuse of religion which seeks to justify war and terrorism. And yet, in the years that have followed, numerous populations have nonetheless been painfully wounded by war. People do not always understand that war harms the world, leaving in its wake a legacy of sorrows and hate. In war, everyone loses, including the victors.

We have prayed to God, asking him to grant peace to the world. We recognize the need to pray constantly for peace, because prayer protects the world and enlightens it. God’s name is peace. The one who calls upon God’s name to justify terrorism, violence and war does not follow God’s path. War in the name of religion becomes a war against religion itself. With firm resolve, therefore, we reiterate that violence and terrorism are opposed to an authentic religious spirit.

We have heard the voice of the poor, of children and the younger generations, of women and so many brothers and sisters who are suffering due to war. With them let us say with conviction: No to war! May the anguished cry of the many innocents not go unheeded. Let us urge leaders of nations to defuse the causes of war: the lust for power and money, the greed of arms’ dealers, personal interests and vendettas for past wrongs. May there be a greater commitment to eradicating the underlying causes of conflicts: poverty, injustice and inequality, the exploitation of and contempt for human life.

May a new season finally begin, in which the globalized world can become a family of peoples. May we carry out our responsibility of building an authentic peace, attentive to the real needs of individuals and peoples, capable of preventing conflicts through a cooperation that triumphs over hate and overcomes barriers through encounter and dialogue. Nothing is lost when we effectively enter into dialogue. Nothing is impossible if we turn to God in prayer.  Everyone can be an artisan of peace. Through this gathering in Assisi, we resolutely renew our commitment to be such artisans, by the help of God, together will all men and women of good will.