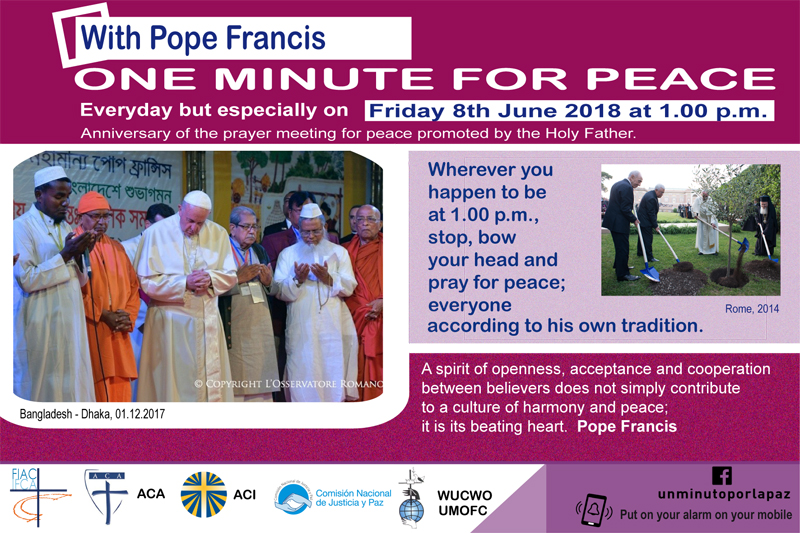 The “One Minute for Peace” initiative was launched by the International Forum Catholic Action (IFCA), the Argentinian Catholic Action, the Italian Catholic Action, the World Union of Catholic Women’s Organisations (WUCWO) and others, for the first time on June 6, 2014 at 1 pm, in support of the “Invocation for Peace” meeting, promoted by Pope Francis on June 8 in the Vatican Gardens together with the President of Israel (Simon Peres), the President of the Palestinian Authority (Maḥmūd ʿAbbās – Abu Mazen), and the Patriarch of Constantinople (Bartholomew I).

Since 2015, every year, “One Minute for Peace” has been promoted around the world on June 8 at 1 pm. During the General Audience of June 7, 2017, Pope Francis mentioned the initiative, stressing that “in our time there is great need for prayer – Christians, Jews and Muslims – for peace”.

What to do? To encourage and propose to all those who care about peace, to believers and non-believers, a minute of prayer or silence.
We can pray alone or in groups, in our homes or in the places of work or study.
We can consider holding a celebration in a place of prayer or a common moment in an open space.

It’s up to us! Let’s spread this initiative to count on an increasing number of MINUTES FOR PEACE  worldwide.